Welcome to the new Anacreon. This version carries forward many familiar concepts from its predecessors, but it also contains radical differences. This guide will help you learn about the new game mechanics and user interface.

To play the game you need a Kronosaur Multiverse ID. If you've already signed up to play Transcendence you can use the same username and password to sign in. Otherwise you will need to register a new username.

Once you've signed in, you have the option of joining a game in progress. The beta test scenario is called Fallen Worlds Beta I. [In future release you will be able to create a new game, but for this test joining a game is the only option.]

NOTE: You cannot control more than one empire per game. Please do not create a second ID to play as a second empire—you will be taking up a slot that could go to another player. 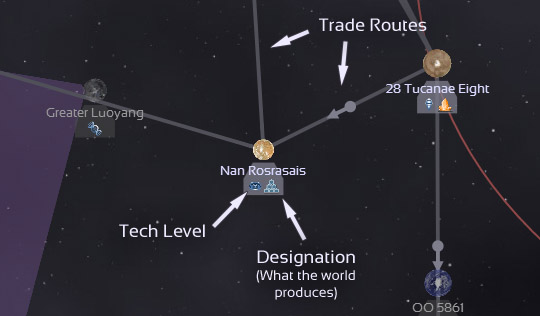 As with prior versions, the map is the most important display. Use the mouse to select worlds and fleets on the map. You will see information about the selected object at the bottom of the screen.

At the top of the screen you will see a scale indicating the current zoom level. The plus and minus buttons will zoom in and zoom out. The planet icon on the right of the scale zooms all the way to planetary scale. Conversely, the galaxy icon on the left zooms back out to a scale of 25 light-years.

You can click and drag on an empty part of the map to pan around. You can also use the plus and minus buttons on the keyboard to zoom in and out. Finally, you can Ctrl+Click on a world to center the map on that world.

Select a world (e.g., your capital) and click Deploy to deploy a fleet.

Use the up arrow to move units and resources from the world to the fleet. Use the down arrow to move back to the world. You can type in a number to move in different increments.

To attack a world you need to bring infantry brigades. Make sure you bring at least twice as many brigades as the target world has.

Explorers are good for scanning space. Send them out to a known world and they will scan the area around it for more worlds. You must have at least 100 explorers in a fleet to achieve maximum scanning range.

Fleets move once per watch. A watch is equivalent to 1 minute of real time or 6 standard hours of game-time. The watch at the top of the screen tells you the progress of the current watch.

Once a fleet has reached an enemy world you can attack it. Select the world and click Attack.

The attack will take place automatically, without your intervention. But if you want to see the attack, click on the floating pane to zoom in.

You can control individual groups, but in practice the AI is competent enough to handle the entire battle.

The AI will automatically abort an attack if it is wildly outnumbered or if it lacks sufficient ground troops to invade.

When you've conquered a world, you can designate it to produce something.

The best way to maximize the productivity of your empire is to allow each world to concentrate on one industry and import all its requirements.

You can also build structures on a world. For example, a world with a GDM complex will product GDMs (ground defense missiles).