Beta 1 Is Ready for Testing!

I'm proud to announce that Anacreon Beta 1 is running on the server. Beta 1 implements all the major game mechanics planned for the 1.0 release, and although it lacks much polish and balance, it is largely feature-complete.

The major feature of Beta 1 is nebulae, along with the worlds and ships unique to that environment. But there are also many bug fixes related to revolution, production, and combat.

In Beta 1 I've also started a new game, called Fallen Worlds Beta I. The original game, Fallen Worlds Alpha I will continue to run and will get all of the new fixes except for nebulae.

Nebulae affect visibility and movement, but also provide safety from starships. There are three kinds of nebula in the game: dark nebulae, bright nebulae, and rift zones. 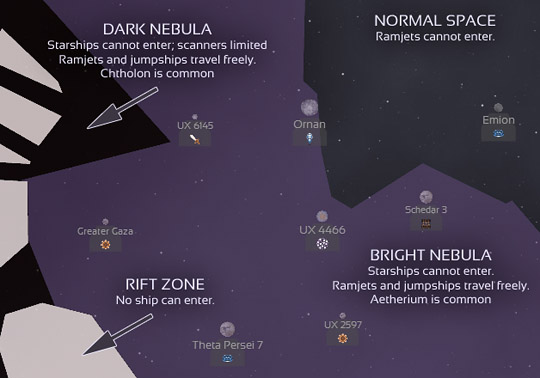 Dark nebulae are impenetrable to starships, and as their name implies, they restrict visibility. Explorer ships scanning a dark nebulae will only see half as far.

Like other nebulae, bright nebulae are impenetrable to starships, but their density is somewhat lower, allowing scanners some visibility.

Bright nebulae are the birthplace of aethereal worlds, which contain large amounts of aetherium, a substance used for certain ship classes.

Rift zones are the dark matter backbones of nebulae. Rift zones block all travel, including jumpships and trade routes. Fortunately, rift zones are generally small, allowing experience pilots to navigate around them.

Jumpships spend almost no time in realspace and can jump through nebulae as easily as empty space. But nebulae prevent massive starships from building up the speed required to enter transpace. Ramjets solve this problem by using the nebula itself for propulsion.

Ramjets have been used for thousands of years. They suck in nebular gas and use it as fuel to propel themselves. Once they reach the transpace threshold they can engage their FTL drives.

Ramjets are as large and powerful as starships. They are built only on worlds inside nebulae, and their construction often requires aetherium and chtholon.

I've made several gameplay changes to Beta 1 to address prior feedback.

I offer a huge thank you to everyone who provided feedback on the Alpha releases—Anacreon has improved immensely because of it. But there's still lots of work to do, so please keep the feedback coming!

The beta series of releases will concentrate on three things: usability, game-balance, and polish.

Anacreon is too hard to learn right now. I need to add both tutorials and clearer in-game instructions.

Similarly, there are lots of UI improvements that would help beginner and experienced players alike.

There is much room to improve the game mechanics. For example, penalties for attacking smaller empires might need to be increased.

Finally, there is lots of opportunity for polish. Beyond basic bug fixes, the game could use more graphics enhancements and special effects.